Difference between revisions of "Climate"

Freeman Dyson says the models are wrong, carbon dioxide is good and not the major cause of global warming. 22:46 minutes

Freeman John Dyson FRS (born 15 December 1923) is an English-born American theoretical physicist and mathematician. He is known for his work in quantum electrodynamics, solid-state physics, astronomy and nuclear engineering. He theorized several concepts that bear his name, such as Dyson's transform, Dyson tree, Dyson series, and Dyson sphere.

Dyson agrees that anthropogenic global warming exists, and has written that "[one] of the main causes of warming is the increase of carbon dioxide in the atmosphere resulting from our burning of fossil fuels such as oil and coal and natural gas." However, he believes that existing simulation models of climate fail to account for some important factors, and hence the results will contain too much error to reliably predict future trends:

He is among signatories of a letter to the UN criticizing the Intergovernmental Panel on Climate Change (IPCC), and has also argued against ostracizing scientists whose views depart from the acknowledged mainstream of scientific opinion on climate change, stating that "heretics" have historically been an important force in driving scientific progress. "[H]eretics who question the dogmas are needed ... I am proud to be a heretic. The world always needs heretics to challenge the prevailing orthodoxies.[3]

Dyson says his views on global warming have been strongly criticized. In reply, he notes that "[m]y objections to the global warming propaganda are not so much over the technical facts, about which I do not know much, but it's rather against the way those people behave and the kind of intolerance to criticism that a lot of them have."[4] In 2008, he endorsed the now common usage of "global warming" as synonymous with global anthropogenic climate change, referring to "measurements that transformed global warming from a vague theoretical speculation into a precise observational science."[5]

He has, however, argued that political efforts to reduce the causes of climate change distract from other global problems that should take priority:

Steve Goreham is a speaker, an author, a researcher on environmental issues, and an independent columnist. He’s the Executive Director of the Climate Science Coalition of America, a non-political association dedicated to informing about the realities of climate science and energy economics. Steve gave this presentation at the Friends of Science 'Climate Dogma Exposed' event in Calgary on May 9th 2017. He says "contrary to what your political leader, professor, and newspaper tell you, global warming is dominated by natural factors. As a result, thousands of climate and energy laws across hundreds of nations, all summed together, are not going to have a measurable effect on Earth’s temperatures." 45:15 minutes

China and India have a simple choice to make. Either they get rich [by burning prodigious quantities of coal and causing] a major increase of atmospheric carbon dioxide, or they stay poor. I hope they choose to get rich. ...

The good news is that the main effect of carbon dioxide ... is to make the planet greener, [by] feeding the growth of green plants of all kinds [and] increasing the fertility of farms and fields and forests."[6]

Since originally taking interest in climate studies in the 1970s, Dyson has suggested that carbon dioxide levels in the atmosphere could be controlled by planting fast-growing trees. He calculates that it would take a trillion trees to remove all carbon from the atmosphere.

In a 2014 interview, he said that "What I'm convinced of is that we don't understand climate ... It will take a lot of very hard work before that question is settled."[7]

He is a member of the academic advisory council of the Global Warming Policy Foundation, a climate sceptic think tank chaired by Nigel Lawson.

Mr John L Casey is one of America's most successful climate change researchers and climate prediction experts. He is the leading advocate in the US for a national and international plan to prepare for the next climate change to one of a dangerous cold climate era. This new cold era is caused by a historic decline in the Sun's energy output, what he calls a "solar hibernation."

The ideas are encapsulated in Casey's RC Theory of solar variability.

He is the author of the internationally acclaimed climate science book, "Cold Sun" which describes the rationale for understanding why global warming has ended and the effects of the new cold climate era.

The mission of Veritence Corporation is to provide consulting advice and related services to the government, business community, and the general public in its areas of expertise. These areas include climate science, space programs and space policy, geophysics, and management advice in complex scientific and engineering projects. Other videos by Casey see below

In his talk, Piers Corbyn described the failure of standard meteorology (SM) in outlook, theory, and practice. He included: signals in real meteorology data unexplained by SM; real role of jet stream, stratosphere, electro-jets, magnetosphere, solar wind, solar corona, and the Moon; the total inability of SM to explain: sudden stratospheric warmings and its consequences, tropical storm intensifications, angular momentum concentration in tornadoes; and the need for something else such as electromagnetic plasma explanations; the theoretical basis of non-standard long range weather forecasting on a real planet; a summary on his WeatherAction forecasting skill and examples; and the future of forecasting and meteorology, climate 'science' and science in general.

Piers Corbyn began recording weather and climate patterns at the age of five, constructing his own observation equipment. He obtained a first-class honors degree in physics at Imperial College London. In 1969, he became the first president of the Imperial College Students' Union to be directly elected by the student body. He later studied astrophysics in 1979 at Queen Mary College, London, and then began examining the relationship between Earth's weather and climate and solar activity. Following many years of weather prediction as an occupation, Piers formed WeatherAction in 1995, where he sells web-accessible long-range monthly forecasts for Britain and Ireland, Europe, and the USA plus special forecasts of 'Red Weather periods' and related increases in thunder/tornado and earthquake risk. www.weatheraction.com

Looking for a fast track to comprehensive education on the Electric Universe? Those most eager to learn are invited to the EU Workshop, November 14-16, 2014 at the Sheraton Phoenix Downtown. This event will be led by Wal Thornhill and Dave Talbott, who are preparing full summaries of their life's work, something that has never been presented publicly. Wal's talks will be complemented by additional material from electrical theorist Dr. Donald Scott, and Dave's presentations will be reinforced by Ev Cochrane, author of several essential books on the ancient sky. Seating will be limited. Check out: https://www.thunderbolts.info/wp/2014...

The message has been loud and clear for many years—a community of scientists insisting that human activity is warming our planet, taking humanity to the edge of a precipice. But now, as science begins to understand earth's place in the electric solar system, the meaning of the present warming plateau becomes clearer. The Earth-Sun connection, together with the Sun's galactic environment, can help to explain climate extremes of every kind. Today, new voices and new perspectives are bridging the theoretical gaps, and independent investigations have reached some startling conclusions. No one can know the future, but some of the electrical changes in our solar system could point to catastrophic change on the horizon.

Ben Davidson is the researcher behind the Suspicious0bserver channel on YouTube, a channel that has rocketed in only 2 years to over 28 million views with 2 million added a month. Ben was classically trained in law and legal research, before taking up independent research in diverse sciences. His online presence has been a constant source of data dissemination, inspiring public interest in a variety of scientific fields, including the 'electric universe' theories. Ben focuses on the daily solar environment and the electromagnetic interactions between the sun, earth, and the galaxy. It was this interdisciplinary "due diligence" that led him to the surprising conclusions he will present at the conference. youtube.com/user/suspicious0bservers; suspicious0bservers.org

What is wrong with the numers

NPR attempted a sky-is-falling article and ended up confirming that the phrase "climate change" was attached to studies because doing so attracted funding. And "climate change" has taken so long to come about that the fund-seeking prostitutes are once again changing their language..."global warming" was the catchphrase back when Al Gore made his first propaganda film on the subject. Also take note that the chart shows that use of the phrase "climate change" started dropping in 2010...long before the Trump administration. s it possible that, with each study, a number of real scientists realized the hysteria was falsely directed and decided to make better use of their time?

Is The Global Temperature Record Credible?

In this video I make a detailed examination of the quality of the global temperature record, which all of climate science is dependent on. It is a long video, with lots of important historical information. 22.5 minutes

Another Casey Video: The Sun Drives the Earth

The sun not only drives the temperature of the atmosphere but also the earth itself. Most meteorologist do not understand how the earth works because they have their head in the clouds. In 1992, it was thought that volcanos produced only 100 million tons of CO2 each year. At the turn of the millennium the figure was closer to 200 million tons. The most recent estimate, released this February Mike Burton of the Italian National Institute of Geophysics and Volcanology is just shy of 600 million tons. That is six-fold increase in just two decades but the trend reaches back even farther and if you count undersea volcano activity something is a foot that meteorologists are not accounting for.

Around 500 AD volcano eruptions cooled the earth so much that people were eating each other from China to Europe. The same type of cooling has happened numerous times and you will pray for global warming in the future while vegetarians become meat eaters again rather than starve. Grain reserves world wide are lower than ever in history and the same powers that has you all worked up about greenhouse gasses is not doing a thing about it for the general population.

Ian Rutherford Plimer (born 12 February 1946) is an Australian geologist, professor emeritus of earth sciences at the University of Melbourne, professor of mining geology at the University of Adelaide, and the director of multiple mineral exploration and mining companies. He has published many scientific papers, six books and is one of the co-editors of Encyclopedia of Geology. He has been an outspoken critic of both creationism and the scientific consensus on anthropogenic climate change.

Plimer has said that volcanic eruptions release more carbon dioxide (CO2) than human activity; in particular that submarine volcanoes emit large amounts of CO2 and that the influence of the gases from these volcanoes on the Earth's climate is under-represented in climate models.

In 2009, Plimer released Heaven and Earth, a book in which he says that climate models focus too strongly on the effects of carbon dioxide, and do not give the weight he thinks is appropriate to other factors such as solar variation.

Of course critics argue against Plimer but calderas and even lakes emit CO2 with no eruption to the point that animals and people even die. Much of that emission goes undetected. Even the measuring of CO2 levels from the volcano at Mauna Loa which are often cited are being measured on the top of a volcano.

People need to get their heads out of the clouds and stop trying to rule everyone else so their eyes will be open long enough to see how they are already biting one another. 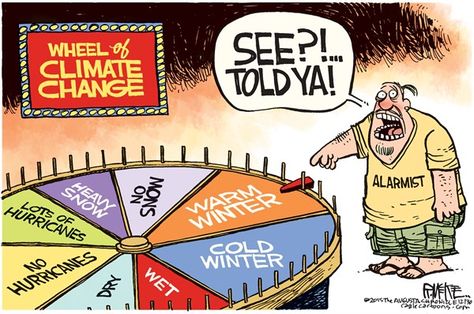